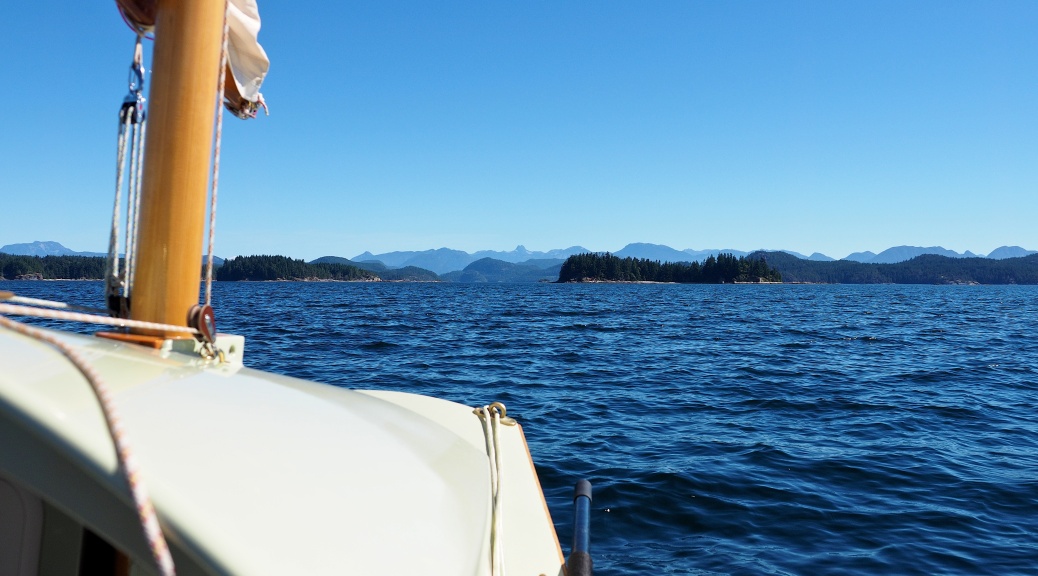 Saturday July 18: day 2 of our voyage, a very hot day, a fabulous sail, and 0 miles gained.

Our objective was Cortez Island, about 6 NM due east of Heriot Bay, across the southern end of Sutil Channel. Forecast was 10 to 15 Kts of wind out of the northwest, with an ebbing current (flowing towards the north) until 13:30, when it would turn and flush us southward at 1.5 to 2 Kts. Once crossed we’d head north to Coulter Bay or perhaps even as far as Carrington Bay, if there was enough breeze. If not enough wind to buck the current, we could bear off south to Whaletown, or one of several other havens further down the coast of Cortez. With plenty of time ahead we didn’t really care where we went, just the going was more than good enough.

Setting off was delayed a bit, I had to repair a rip in my prototype boom tent. The recycled tent-fly fabric was so degraded by sun in it’s previous life it split wide open across a stress point. Several feet of gaffers tape applied, and we left the dock at 10:00, on a sunny morning with a gently building breeze. 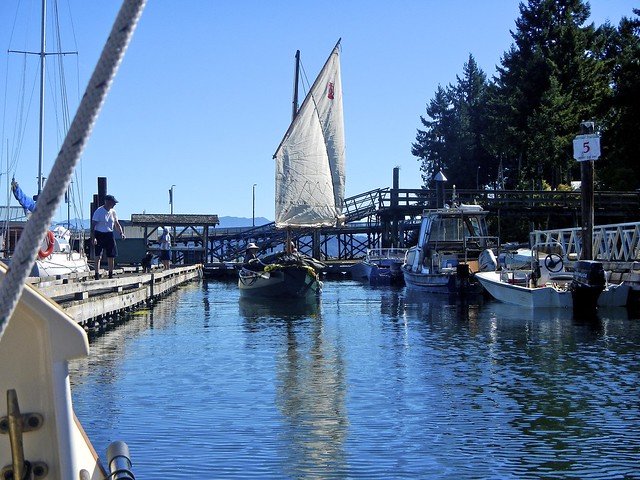 saying good bye to “the folks” at Heriot Bay 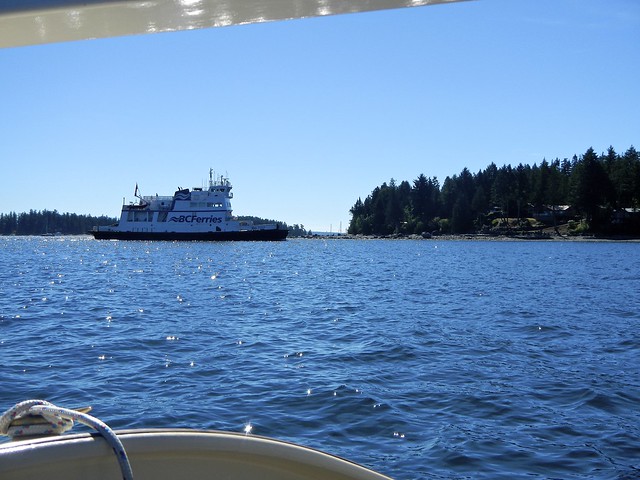 Anticipating the breeze we all put a reef in at the dock, and as we beat out of Heriot Bay the promised pressure appeared, reassuring our decision. We aimed for the Breton Islands to the northeast, planning to go through them, then cross Hoskyn Channel to the southern end of Read Island which would be about halfway to Cortez. As we got into the Bretons we realized that they were blocking the wind, and, after a few tries gave up our attempt to get between them and bore off to round the southern end of the group. 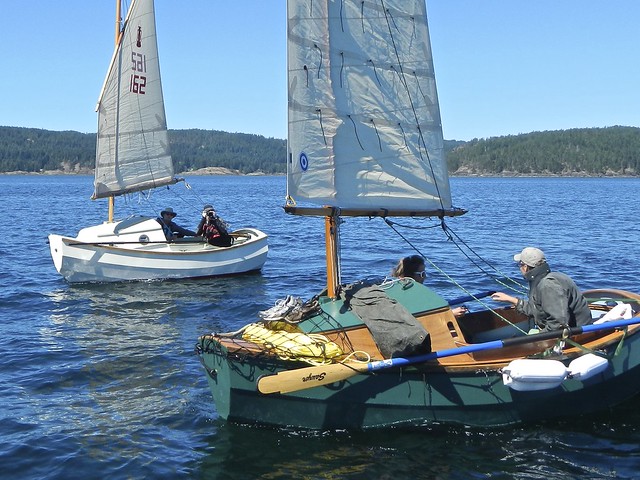 LUNA and LIBERTY in the Breton Islands

Derek had by now shaken out his reef but Keith and I were still carrying ours, and looking across the whitecaps in Hoskyn, we felt comfortable with our sail area. Running along the islets at the southern tip, we cleared the lee and gained speed quickly as a group of hauled-out seals watched us fly by. Yippee! This was it! Dreams come true!

Hardening up to a beam reach once clear of the rocks, our excitement and joy notched up another level, we were rocking! 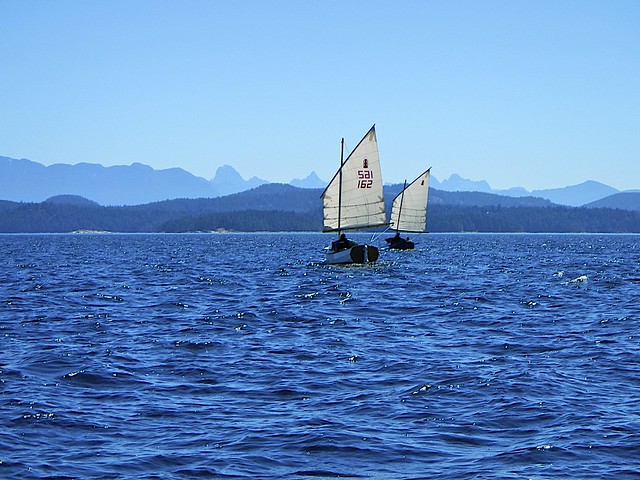 Within minutes we were in the middle of the Channel and could see the pressure was easing ahead, so bore off a bit, then a bit more, and soon we were running and the wind was disappearing. Obviously being blocked by Read Island, it seemed we would have to give Viner Point, at the southern tip of Read, a wide berth to stay in some breeze. Derek was about a quarter mile behind Keith and I, and seeing our plight, bore off earlier to round further south of us.

Shake out that reef and shift to light air tactics — work crew positioning for boat speed, ease the outhaul a bit more, play the shifts and wind lines, watch for ripples, all good fun. Frustrating, though, not being able to make trees on Viner, in fact, it’s not getting any closer… but there’s a line just over there… a wee bit more… damn! now it’s behind us, oh, here it comes…

“I’ve had enough of this shit! Look, we can hardly even see Viner now, we’re so far away. We’re just getting further and further, we’re way out in the middle, and I don’t like this!! I don’t want to go to Comox, and that’s where we’re headed…”

I pull out the Navionics track on my phone, and sure enough, we’re now 1.73 NM south of Viner Point. 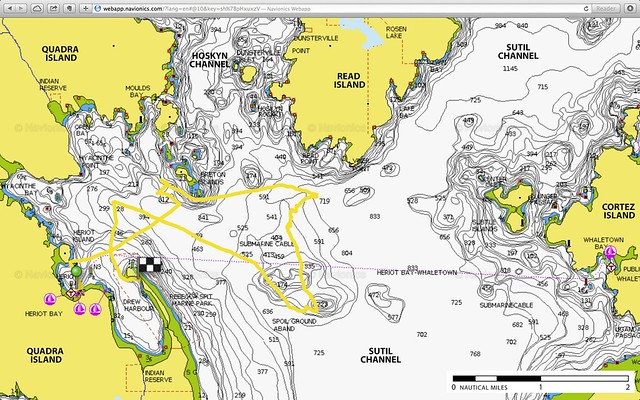 Although we were always pointing towards Cortez, and it felt like we had boat speed, we’ve actually been dragged south all this time. Did the current turn to flood early? Were we in a massive back eddy? We shouldn’t be here!

I deployed the oars, and Chris got on the radio. Derek and Lacy were a lot further south than us, a little dot on the horizon! Chris outlined our decision to row, and urged them to do the same. Keith was right behind us. We head northwest, half an hour of pulling took us a mile closer to the Bretons, and, all of a sudden, we were out of the wind shadow of Read. We hoisted sail and beat into that familiar 15 Kts of breeze coming out of Hoskin Channel. Overpowered, we soldiered on, not willing to give any northing away, now that we were moving. Another half an hour and we were very happily well west of the Bretons, and decided to bear away and run down into Drew Harbour for the night. We hit 5.6 kts as we eased off our heading, and we were soon on the beach inside Rebecca Spit. Landed at 15:50. It took Derek about an hour longer, short-tacking up the shore of Quadra, staying out of the current. 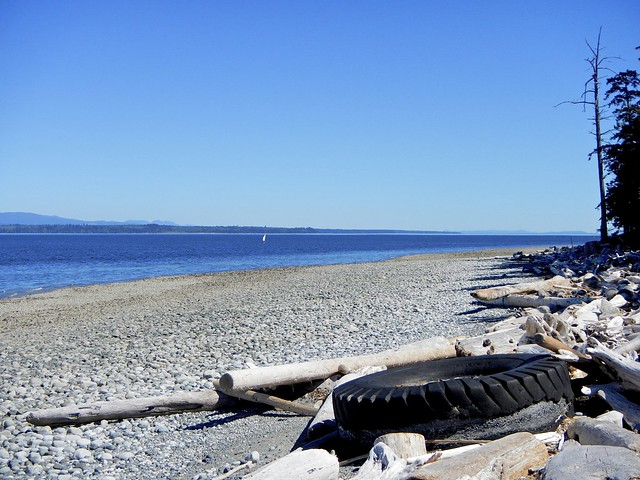 LIBERTY beating up the shore 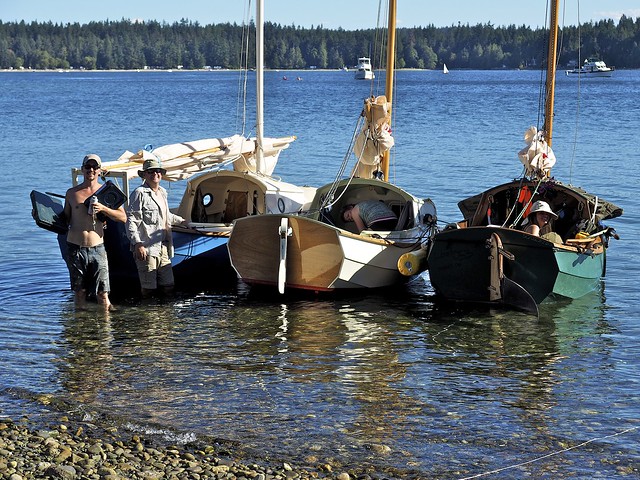 setting up a clothesline anchor in Drew Harbour 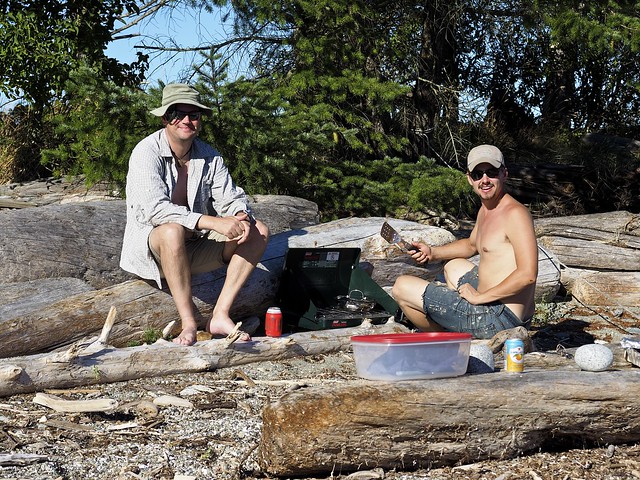 dinner on the beach of Rebecca Spit

Dinner on the beach less than a mile from where we had set out in the morning, lots of laughs, decompression, and planning our second attack of the crossing. We slept on a clothesline anchor, Keith on the beach, and Derek and Lacy anchored off after a sunset sail around the bay. 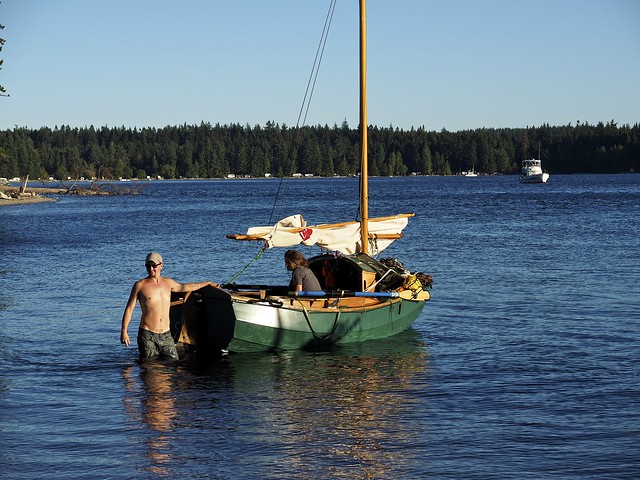 Derek and Lacy head off for an evening sail 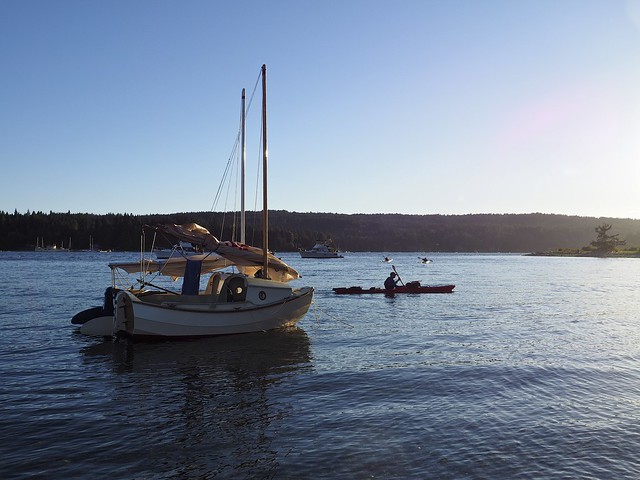 kayakers glide past our anchorage 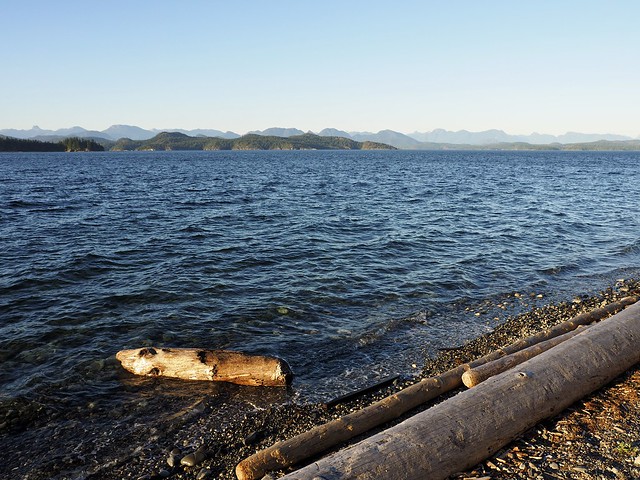 Read Island at centre, and Cortez Island to the right (almost due east): our goal once again!